By Tony Deligio on Plastics Technology
May 5, 2022

Improving quality has an immediate impact on an injection molder’s bottom line and productivity. But just as important, if less quantifiable, is the effect on client mood. “We’ve saved a lot of money,” Andrew Peterson says, “and we have happier customers—you can’t put a price on that.”

Peterson, COO of the Pyramid Molding Group, which includes custom injection molder Pyramid Plastics and toolmaker Industrial Molds, both of Rockford, Ill., made quality the primary emphasis of the molding business when he took over company’s day-to-day operations.

“When I came to Pyramid Plastics in late 2019, quality was our number one issue,” Peterson says, “and it affected every department—production, accounting, scheduling, customer service, shipping— so we really made it a cultural focus.”

Peterson stepped in for his father Tim Peterson and uncle, Eric Peterson, after he spent 10 years at Industrial Molds, which was started in 1968 by his grandfather, Jack Peterson. Jack invested in Pyramid Plastics (founded in 1976) in the 1990s before eventually taking it over. Both businesses are run independently today but under the new unified brand of Pyramid Molding Group, created in 2020. 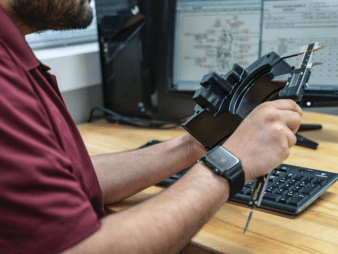 Quality became an overriding focus for Pyramid Plastics and key to a new work culture.

His first decade spent on the tooling side after graduating from Wright State University in Dayton, Ohio, informs how Peterson runs the companies today as independent businesses but with a symbiotic relationship. “In 2021, we changed strategically how we marketed,” Peterson explains. “We saw a lot of consistency in plastics. From a business standpoint, it’s more predictable and a lot more steady, so we wanted to focus on selling our plastics, and that would in turn give us sales in our tool shop.”

The strategy has proven effective, according to Peterson and Pyramid Plastics’ production supervisor Chase McNitt, with approximately 35% of Industrial’s new mold sales running on Pyramid’s molding machines. “The molding cash flows are much more reliable, the workflow is reliable,” McNitt says, “and in turn, it does drive tooling sales, whereas the other way around didn’t drive molding sales.”

Pyramid Plastics recently boosted the availability of its molding services by installing three new hybrid LS Mtron ONE injection molding machines, including two 1000-ton machines and one 550-ton press. Pyramid now has 30 injection machines, ranging in clamp force from 40 to 1000 tons. To accommodate the new machines, the company increased its production floor square footage by 12%, converting 3200 ft2 from storage to manufacturing.

The company also installed a new 7.5-ton Konecranes overhead crane, which joined an existing 10-ton crane. The new crane allowed Pyramid, which occupies approximately 43,000 ft2 and employs 55, to put the machines closer together, further maximizing floor space, as did a switch to standup forklifts.

The machine additions, and the upgrades to power, water and air that they required, are phase one of a three-year plan to expand the business. Subsequent phases include the intention to add three to five new machines annually for the next two to three years, replacing aging presses and adding new capacity.

McNitt jokes that several of the machines Pyramid swapped out were old enough to purchase alcohol. In addition to youth, the new presses have boosted productivity over their older counterparts by 20-40%. When Plastics Technology visited, one of the new 1000-ton machines was molding a large appliance component in a 40% faster cycle and without the need for mold release, which had been applied to the tool cavity every two shots on the former press. Featuring greaseless tiebars and an automatic door, the new machines are cleaner and friendlier than their predecessors, McNitt says. “It’s the little things,” he adds.

A portion of the square footage reclaimed by Pyramid came from removing storage racks that were made obsolete by optimizing the company’s inventory. That was made possible by the adoption of DelmiaWorks Manufacturing ERP (formerly IQMS), which the company began using in 2017.

“With IQMS as our ERP system, we’ve been able to drastically improve our inventory,” Peterson says, “both the locational accuracy, and also how much is there. With that better inventory control, we were able to take some square footage that was used for storage and make that manufacturing space.” The company also maintains an offsite warehouse where it stores all its finished goods and raw materials.

Quality at a molding shop starts with the operators, and the operators start with work instructions. When Pyramid looked to establish quality as job one, it began with those work instructions. Gone were the binders, although they might not have been missed. “There were these big binders that everyone was supposed to read and no one ever did,” Peterson says. These were replaced with simpler three-to-five-page instructions, heavy on images and written in English and Spanish.

“We actually got rid of about 35-40% of our quality paperwork because it was either deemed redundant or just ineffective,” McNitt says. “So we reduced our workload but improved the output.”

Going a step further, Pyramid Plastics assigned numbers to all their jobs, based on difficulty, and to their operators, based on skills. When it comes time to schedule production, these rankings figure prominently. “We rated all our jobs and then rated our operators,” Peterson says. “That’s on the tables out there so we can see if we have a mismatch in skill level to the job, and if so, we can increase our quality inspections.”

Pyramid Plastics uses a panel consisting of the quality department, lead operators and the supervisor to rank its operators across eight categories on a scale of one through five every quarter. In addition to helping to match jobs with operators, these rankings also serve as a basis for the workers’ pay scale, incentivizing them to continuously improve.

“You find out that some operators are really good at this and maybe not so good at that, and you didn’t think about it until the data was there,” Peterson says. “So we’ve been able to maximize their strengths and train to their weaknesses.”

Beyond easier conversations with customers, Pyramid’s relentless pursuit of quality has also afforded the company something else—a chance to grow. “If you have late delivery or quality issues, it makes it hard to grow,” Peterson says. With a goal of achieving $25 million in sales by 2025, Pyramid Plastics needed to grow 20% per year. It’s currently growing at a rate of 30% annually.

“We really try to think big,” Peterson says. “When you’re doing something, looking to make a change, you need to ask if it’s scalable. And then you plan for tomorrow, not today. I think that’s been huge.”